My card tonight is for the Sister’s Challenge and the theme is shells.  It was supposed to be 10pm last night.  But 12:30 am arrived and I was still working on my card, fifth or sixth version.
So as soon as I got home from work I started again and here is my card. 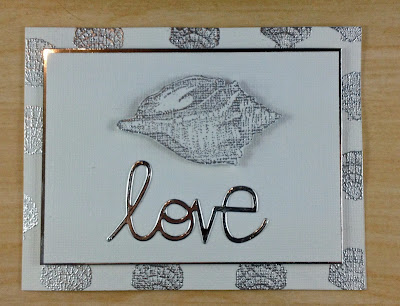 Now pop on over to my sister's blog and she her fabulous response to shells,  Cards and Co

As an aside this idea came from a Nursery Rhyme, although my title is wrong.  Have you ever wondered what the meaning of the rhyme, especially "pretty maids all in a row".  Well I did because the rhyme was going around and around in my head.  It's not nice.  It supposedly refers to King Henry 8th daughter, Queen Mary or otherwise known as Bloody Mary.  Silver bells and cockle shells were the name for the tools of torture and the pretty maids were nuns going to the gallows.  The question "how does your garden grow" was refering to the cemetry and how many people Mary had had killed.  Not nice.  I won't think of the rhyme the quite the same again same ever again.

Thanks for dropping by and sorry I was late getting this post up.