﻿
Hello,
Sorry I have been missing for almost a fortnight.  Life just overtook me.  My son came home for a flying visit, work has been busy, visitors and finally I went to the Melbourne International Film Festival.
I took two TOIL days and went into Melbourne for a long weekend to attend the Film Festival.  I saw 13 films in 3 days.  My favourites were probably the first and last films I saw - two Japanese movies, "Tokyo Family" and "Like Father, Like Son".  I enjoyed "Stoker" Although I don't usually like thrillers.  This film is from the USA, directed by a South Korean and the female stars are Nicole Kidman, Jacki Weaver and Mia Wasikowska - all Australians.  The Australian film "Mystery Road" starring Aaron Pedersen is well worth seeing.  The German film "Patty's Catchup" was sweet. "Bekas"  (Sweden/Finland/UK) is the semi autobiographical story from  the director Karzan Kader, and could have been very grim but was warm and hopeful.
I saw other films but I think these were the highlights.  One of the Festival venues is the Forum Theatre and I just love this building.  It was built about 1929. 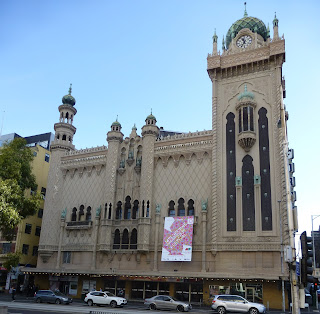 There is another Festival venue directly opposite the Forum, in Federation Square.  This building is very modern.

Well that is enough waffle for now.  Down to business.  The inspiration for my card tonight came from the challenge at Less is More, A Pinterest Picture Inspiration

The recipe this week is a killer picture inspiration.
The answer to the question are these shoes fab or are they fab?  Is a definite Yes and YES. 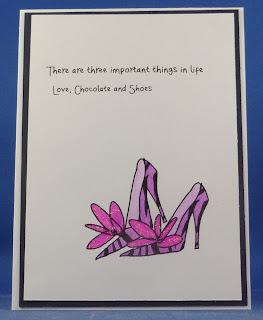 Take care and thank you for dropping by
By Skye at 00:17